How did Chuggwagon come to be? Sam Hill and I (Shannon) were between bands at the time and saw our mates Beggarman playing at the Albion. Idle played that gig too! We are both metal guys and were inspired by the band to start something. Something with a heavy southern groove.

We started to write a handful of songs and Sam eventually decided to go in a heavier direction with another band ‘Eviscerator’. Those songs are still usually included in our setlists. Steely and Hammo came on board and have been with us since. We’ve had a few lineup changes since this time and Hammo has gone from Bass to guitar. Mike has been a really good fit in the band for the past couple of years. Most recent addition is Tim Cover who both Sam and I have previously played with in other bands and was an obvious choice. Pretty stoked with the line up today and will be hopefully be gigging more this year with a full band line up sorted.

Who makes up Chuggwagon and where y’all from? All local lads from Albury / Wodonga / Lavington area

You finished last year at DIMEDAY ’16 – How the bloody hell did that make you feel? Great first gig with the current line up! We are all huge pantera fans, especially Hammo and Steely who have a few Pantera tatts. A big influence on our song writing for sure. Had a ball playing there and had a pretty good reception. We had played there once before, I missed the gig though as I had wedding (not very metal I know). 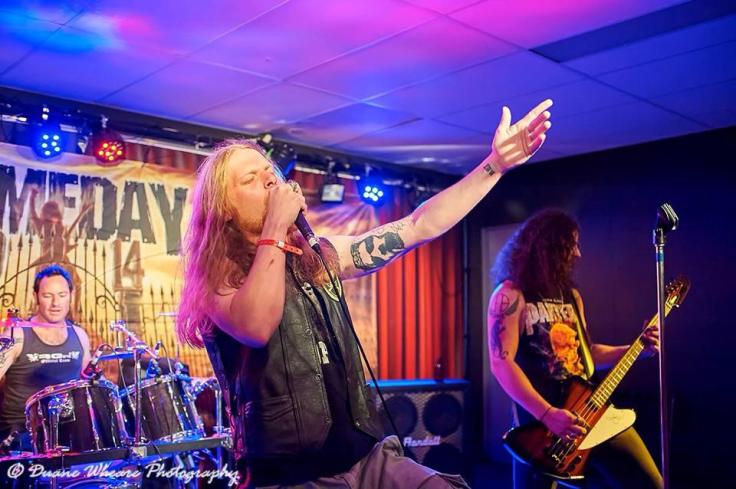 When writing what comes first? The music or the lyrics? When Sam and I wrote the earlier songs it was guitar first. It’s become a bit more collaborative with the songs being written as a band, but for me I feel you need a riff to start the process. Steely generally comes in with vocals later on. That said, when Steely brings a song to the table it’s generally all done together. He has a pretty clear vision about how he wants the song to sound which makes things easy.

Where and how did you record your tunes? We recorded in Wagga a few years ago. It was a good learning experience as most of us hadn’t recorded before. We have been pretty slack in releasing it as an album, and are actually pretty keen to record some of our new stuff. We have chucked some songs on YouTube but that’s about it at this stage.

Whats the meaning behind the band name? Steely actually got this from a song off a sega game haha. I have no idea what that game was but I feel the name suites us.

What is the underlining inspiration for your music? How do you get your best idea? I think we’ve become more comfortable playing together and if the song is working it comes across pretty naturally. If it’s not working I think you need to put it away for a bit and come back to it. We have different tastes in music at times, but I’d say one thing we have in common is our love for heavy music. I like to think of us as a bunch of metal heads trying to do our take on rock songs haha.

Do you ever listen to your own music? Might watch a live show once to see how it sounded but that’s about it.

What bands (if any) did your members play in before joining Chuggwagon? Mikes been in a few including Idle Fret, Dadscrampy and Red Hot Chilli Players. Tim and I were in Master Tang together and Tim’s been in a Enviscarator and also currently playing in his new band Dear Survivor. Steely has been in a couple of long running metal bands over the years, Blunt Object Trauma and Heathen Ritual.

What’s your view on Albury / Wodonga’s music scene? And what advice would you give to young musicians? I think the scene went a little quiet after the original Sodens shutdown a while ago, but it has been getting much better recently. There are a lot of talented muso’s around town and I feel that the scene is much stronger than it has been over the past few years. Particularly with places like the SS&A club stepping up there live music and people actually having somewhere regular to play and see live music.

It is sometimes disappointing to see Albury/Wodonga getting looked over when Australian bands are doing big National tours. You’ll often see gigs in Melbourne and then Wagga without Albury/Wodonga being considered (particularly for some of the heavier bands), which is a shame as I feel the scene around here is strong enough to support bands making the effort to play here.

What (other) music do you listen to? We all love our heavy stuff but vary a little with some rock and alternative stuff too. Alice in Chains, Queen, Lynyrd Skynyrd, Muse, Red Hot Chilli Peppers, Dropkick Murphy’s to name a few bands we’re into.

What has been the biggest highlight so far for Chuggwagon? I’d have to say playing Dimeday last year. Great crowd and any excuse to play Pantera covers and have a bunch of beers!

What can punters expect from your live show? High energy, old school metal tunes. Steely has good stage presence to get people going and usually has some pretty insightful messages (politics, the music scene, global warming) to say between songs. Big loud heavy riffs with a southern groove to them. Tim has a huge sound on the drums and you never know what crazy fill he’s going to try on the night.

So, what’s next for Chuggwagon? We have a pre Gold cup gig at the Albion on the 23rd of March with D.I.E F.M, Dear Survivor and In The Name of silence. Supporting Metallica cover band in August and potentially a Melbourne gig or two in between that

Catch Chuggwagon in the flesh at The Albion Hotel, THURSDAY The 23rd of March. This is an 18+ Show, $10.00 Entry at the door. Doors open at 7:30pm with the night kicking off at 8:00pm. For More info click the poster below.